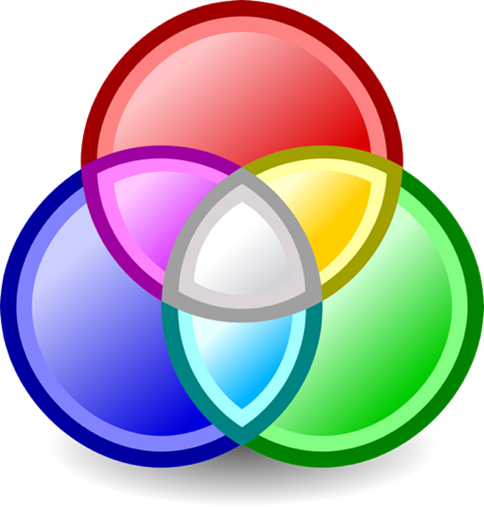 How to “See” the Elusive Venn Diagram

A Venn Diagram is described by Will Kenton in Investopedia as “an illustration that uses circles to show the relationships among things or finite groups of things. Circles that overlap have a commonality while circles that do not overlap do not share those traits.”

It might seem odd to focus on the concept of Venn Diagrams in an article about coaching. But, believe it or not, it is a wonderful illustration for a foundational aspect of the coaching process. When we work with a client, we encourage their curiosity about what they are experiencing and work to “stay in the moment” to help them fully explore their situation, challenges, and opportunities while we also invite them to see the patterns they notice as they explore their thoughts and feelings.

These patterns vary. Some might be words that are often repeated. Or they can be a smile whenever they speak about a certain idea or person. They can also be when they discover that the varying viewpoints of others may actually have shared commonalities not previously considered. Being able to notice and appreciate patterns is foundational to learning and development.

In a recent session, a client was describing a major event occurring for their company. In some cases, the varying viewpoints on resolution of the issue were diametrically opposed to each other. A team that was previously cohesive and aligned was struggling to share perspectives without exploding into argument. My client was concerned, largely due to their high regard and respect for every member of their team.

I asked the client if they saw a pattern in what they were describing.

“What is it that each member of your team identifies as the issue?”

“Every team member has a different perspective,” the client answered.  “One sees the issue as financial. Another thinks it’s related to human resources.  And yet another sees outside influences at play.”

I paused and took another tack. I invited the client to close their eyes – to imagine each member of the team as a circle. Then I invited this perspective:

“Take a step back in your mind and envision where those circles overlap. Please tell me what you see.”

There was a long pause and I waited. Then the client opened their eyes and spoke:

“Well, the first overlap is this:  Every member of the team feels responsible for the success of the company.

“Anything else?” I asked.

The second overlap is: “Each individual wants the current crisis to be addressed.

And Third:  Everyone is feeling stress.”

The client paused again and looked thoughtful. The concept of the overlaps – the “Venn Diagram” had registered. They went on:

“Yes, there are commonalities and if I step back I can see the overlap.  I just had to look at it a bit differently.”

From there the client was able to discover that the team had points in common and that their “system” had areas that were well developed. From there, the team could make choices to add range and to try different approaches based on the patterns they observed.

In Gestalt Coaching, we look for such patterns and invite the client or the system to see them. When they do, they can become curious about what the team can add to their capabilities and how each person, including the leader, can help them move towards it.

Dave Bushy of Boston Executive Coaches is an ICF-certified coach who was trained at the Gestalt International Study Center (GISC).  He is a former U.S. Army officer and senior airline executive who works with leaders throughout American industry.

PrevPrevious ArticleDisability Inclusion at Work: From the Perspective of a Blind Professional
Next ArticleShiny PenniesNext