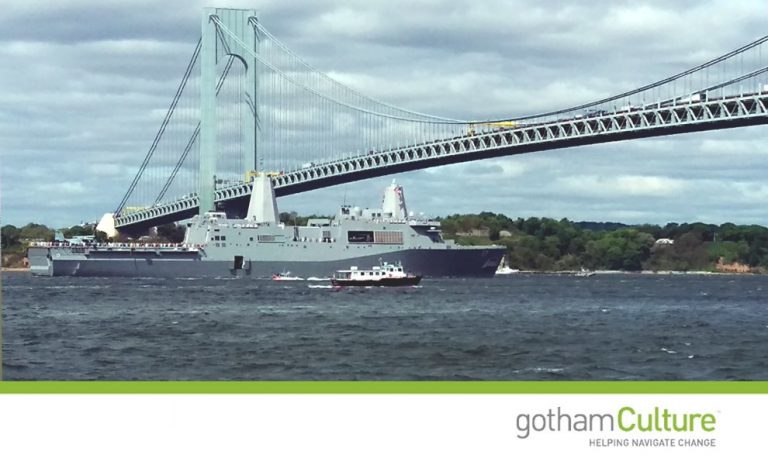 The Transcendence of Military Culture and Values

The United States Military culture, regardless of branch (Army, Navy, Marine Corps, Air Force or Coast Guard), is attributed with values and behaviors of LDRSHIP: Loyalty, Duty, Respect, Selfless Service, Honor, Integrity and Patriotism.  As I outlined in a previous article about our veterans, these are great values to epitomize and work towards in your own corporate culture.

What I have learned more recently is that employees in many organizations may think these values don’t currently reside there, or that they are far removed from the behaviors of the staff in general, may be surprised when they take a closer look. These organizations already epitomize, in their own way, these values of respect, belonging, loyalty, service and duty.

Here’s the experience that brought this realization to light:

Recently, in the same week, I visited both a client site of one New York City organization, and a US Navy client. Two very distinct and diverse organizations; city government and federal/defense.

As I was leaving the New York City client site, we all knew that the infamous “Fleet Week” was arriving here in New York, so we took a drive down to Fort Hamilton on the water to watch the USS New York arrive in all its glory.  As it passed under the Verrazano-Narrows Bridge, the management and uniformed staff of Triborough Bridge and Tunnel Authority made it clear that they were proud of not only this magnificent Naval Ship (forged from the steel of the twin towers of 911), but of the equally as magnificent structure that Naval ship was sailing under, the Verrazano-Narrows Bridge that they each manage, protect and maintain.

To quote, “A beautiful image… a naval ship on the backdrop of the Verrazano.”

Though half a century apart, both of these government assets were built with the blood, sweat and tears of Americans. Both structures represent, in their own way, cultures of pride, of strength, and service to country. The bridge keeps the economy of New York City moving and the Naval Ship keeps the citizens and infrastructure of our United States economy safe from harm.  Two distinct missions, with two similar and transcending cultural compasses, representing withstanding and honorable service to the people they serve.

Sometimes the culture you desire—that you think doesn’t exist—is already there under the surface. It just needs to be tapped into.

I encourage employees, employers, owners, executives to think about what you each define as a honorable and respected culture and then try to emulate that in your actions, decisions and behaviors within your own organization.  You may be surprised at how close your current organization is to that seemingly far off culture and values you have been seeking.

We all need perspective like this at times to see past the fog.

May we all think of the majestic naval ship sailing under our own ‘bridge’ this Memorial Day and attempt to help our teams, our departments and our organizations do more to instill the culture we all desire.

Many thanks in memory to those who have served for our freedom.