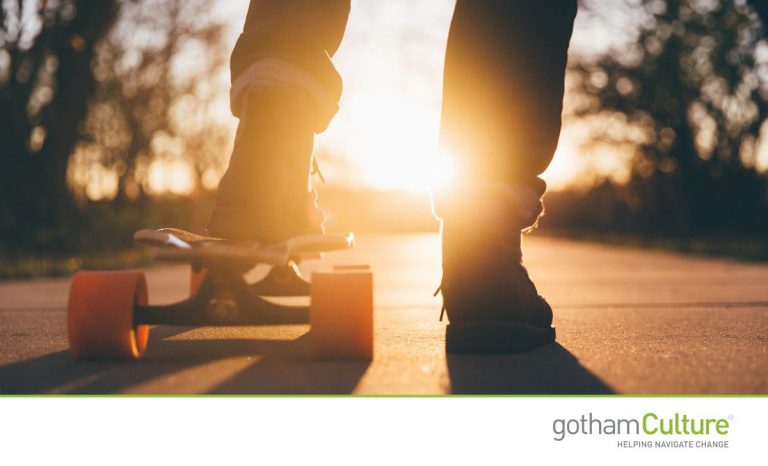 How to Fail Successfully

My youngest daughter is a skateboarder.  With her, I’ve spent a fair amount of time at skateboarding events and at skate parks.  While I’ve been wowed many times by bold and amazing stunts, I’ve also noticed one thing:  skateboarders fall.  A lot.  Pros, beginners, veterans and young rippers all hit the deck.  Mount a GoPro on their helmet and the courage factor goes way up but it still doesn’t keep them from falling. Here’s the thing: they almost always bounce right back up.

Why is that?  Well, for one thing, they (sometimes) wear protection.  Mostly though, their ability to jump back on the board uninjured is because they know how to fall.  In skateboarding, knowing how to fall (or fail) is part and parcel to knowing how to continue to push to achieve new tricks (or success).

“Knowing how to fall is, like, a basic life skill,” one skateboarder told me.  “If I didn’t know how to fall, I wouldn’t be able to learn new tricks either.”

Which brings me back around to business. A while back, I was talking with someone about challenges within his company.  One segment of his business had been steadily declining for over 10 years. While the struggle was evident in results and plenty obvious for all to see, the business decline was ongoing.  Over the course of that long fall, insiders were at times in denial that it was occurring, expectant that the situation would change, reaching for new things that would turn results around, attributed the failure to external factors, and then ultimately decided it was inevitable.

Everyone recognizes outrageous success and, likewise, a colossal failure is usually pretty easy to spot. It’s the results in the middle that are harder to recognize much less do anything about.  Those are the times when results don’t go to plan and people are either satisfied enough or defensive about the results. And yet, according to a survey by Wharton, on average companies achieved only 63% of their intended outcomes.

How could this happen?   Sure, the consistent failure to hit targets could be related to poor planning, poor execution, external factors, out-sized expectations, or uncertain priorities.  Since companies aren’t baseball players swinging the bat, I’d also say that a 63% success rate is akin to failure.  And while companies may be falling (or failing) short consistently, the fact that it is so widespread means that many organizations aren’t failing successfully.  In other words, the failure occurs without triggering enough changes to improve future outcomes.

So why would anyone want to fail?  No one would.  Just like skateboarders, most companies will face some degree of failure pretty often.  They might call it something else…a shortfall, a modest decline, a short term surprise, a challenge, a delay, an issue, or the all-encompassing “opportunity.”  Think of it another way.  Most adults get behind the wheel of a car on a regular basis. For many that’s a daily occurrence.  Even so, I reckon few drivers are improving their driving skills.  Why?  Because even though driving is a regular experience, we’re not focused on the learning potential and so we don’t improve.  We make small mistakes often and because they’re small, we don’t learn anything new.  Failure in small increments is worse for an organization than gigantic failure because it often doesn’t trigger a learning response.

Chances are, if your organization is nailing goals every time then you’ve figured how to collectively navigate the obstacles faced along the way.  If not though, you might spend some thinking about how to embed some principles of successful failure into your planning and execution.  Doing so will mean you’re not facing it as often as before.

Here’s how I’d define successful failure:  The organization recognizes when a desired outcome isn’t achieved, readily absorbs lessons from what happened, and then moves forward with a shared understanding of what can be done better…along with a committed action plan to make it happen.

Truth is, an organization that has mastered successful failure becomes so adept at adapting that they don’t face failure very often.  Here are some ways to make sure you’re not down for long.

1. Set realistic and attainable goals.  This is a fundamental principle of effective personal and organizational leadership.  Goals should reflect market opportunity, conditions, and capabilities. Entire volumes are written on this.  Enough said.

2. Define success in very specific terms.  This is all so common and a basic part of typical annual planning cycles within businesses.  Achieve X in sales, profit, market penetration, share, etc.  Think beyond the numbers and answer questions such as:  What does success look like in operational terms?  How should the group be set up to achieve the goals? What capabilities do we need now?  What role must each group play in achieving the goal? What impact will this have on each group?  Once we have a sense that the project will succeed, how can we accelerate?

3. Define failure in equally specific terms.  Why bother with this?  Let’s look at a scenario. If your goal was to achieve 10% sales growth and you hit 6%, what happens?  For some, that might be just enough to avoid scrutiny and so nothing is learned. What if this were to happen several years in a row?  You achieve some part of your target but don’t hit it.  What happens then? Sluggish performance doesn’t strike suddenly…or, rather, the recognition of sluggish performance usually takes time. Still, taking the time to say upfront what you consider to be failure will go a long way to setting your organization up to deal with it constructively if it occurs.  Rather than arguing or avoiding the topic, it’ll be plain to see…and therefore to address.

4. Complete after-action reviews.  Every. Single. Time.  Too often, the daily onslaught of urgent gets in the way of overarching important work.  A prior success brings excitement and the energy to move on while a prior failure often brings reticence to talk about it. Either way, these are learning opportunities. Don’t miss them. Take the time to reflect.

5. Create an open and adaptive culture.  No one fails on purpose but many smart, hardworking folk find themselves in environments that make them feel forced to defend or justify when things don’t go well.  Everyone loses in those circumstances.  Use real terms to describe business outcomes and be comfortable with plain words.  Don’t hide behind euphemism. People easily see through situations when the rhetoric doesn’t match the reality. Create an environment where people feel free to talk openly about challenges, what went well and what didn’t, and aren’t pressured to rationalize crap results.  This is probably the single most important factor and the hardest too.  Don’t just talk about learning, make sure that it actually happens.  Staging conversations around questions like these can help… What did we learn?  How will that knowledge change things going forward?  What are you most worried about? What are you most excited about?  How can we build on the success we’ve had?

6. Create testable propositions before going all in.  Look for ways to pilot an idea whenever possible. This lowers risk, creates earlier learning opportunities, and the practice improves the odds of future success.  Just like in skateboarding, the fall – if it happens – is a little less painful and you get the learning benefit.

As we all know, success isn’t an inevitable outcome. Neither is failure. By defining both and embedding a few steps into your business planning, you’ll greatly improve your chances of consistent success and adapting to the challenges that come your way.

This article originally appeared on BulldogDrummond.com.

PrevPrevious ArticleHow To Create Change When You’re Not In Charge
Next ArticlePop The Bubble: Having Conversations that Make Us ThinkNext