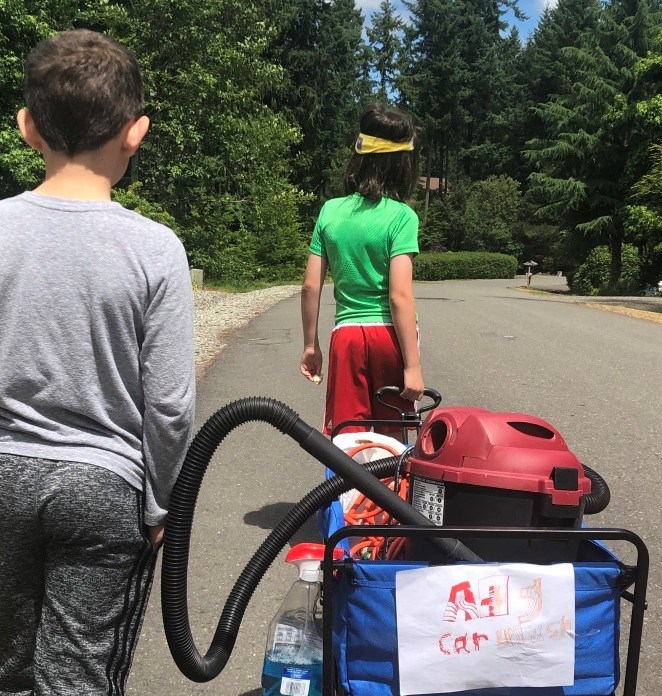 Why Your Kid Needs A Side Hustle

This year, my son gave me the best gift an entrepreneur could ever ask for. Of course, my second grader, like nearly every other eight-year-old in America, has mastered the ability to influence others to get what he wants. With summer kicking off in full swing, these talents typically revolve around spending an inordinate amount of mental capacity figuring out how to get more screen time. Last week, rather than vying to get a few extra minutes of screen time or finding creative ways to get out of practicing his guitar, my son convinced his friend that they should start a business.

After some cajoling, his friend agreed and they went through the process of deciding what type of business they should embark on. A short while later, the boys settled on a car cleaning business (interiors only mind you). After dedicating their attention to touting the virtues of such a business and the benefit that it would bring to the local community, the boys turned their attention to creating posters and fliers that they attached both to their wagon as well as the community mailboxes in our neighborhood.

Loading up their wagon with their (read my) supplies: a shop vac, dash cleaner, leather cleaner, Windex, paper towels, and rags and were ready for business. They quickly realized that not only did they need something to keep their millions in as they moved from house to house but that they needed a pricing structure. Without missing a beat, they immediately dove in and made it happen.

In order to make sure they had their act together, they asked if my wife and I would be willing to let them practice on our cars, something we promptly agreed to. And then it happened. Something in my son sparked. While I intentionally minded my own business, all the while keeping a rather close eye on them as they worked, I could see a sense of pride swell up in the boys. They were doing something for other people. They were taking great pride in ownership and they were making sure we were satisfied with their work. As they worked, they chatted and their conversations were both surprising and inspiring.

After a short while, our cars were clean and the boys added their first revenues to their kitty, a mason jar with a handwritten sign on it sitting haphazardly in their wagon. With beaming smiles, they began their trek from house to house, knocking on doors and pitching their potential customers. With the confidence only an eight-year-old can have, they let rejection slide off their backs with ease, they took future appointments (which they noted on a small pad), and they moved on to the next house- each stop an opportunity to perfect their pitch.

We’re now a few days into their business and they are still going strong. They have made a surprising amount of money and with summer vacation rapidly approaching, they are already strategizing how to expand their operation into other neighborhoods as well as hiring and training new employees in order to expand.

Why am I telling you this?

It is not uncommon for young children to start a business. Lemonade stand. Mowing lawns. Manicures. (Yes, manicures). It almost seems like a right of passage for many kids in America. I recall multiple businesses that I myself ran as a child with fond memories. All of them, opportunities to develop skills and practice new behaviors that I could take with me the rest of my life.