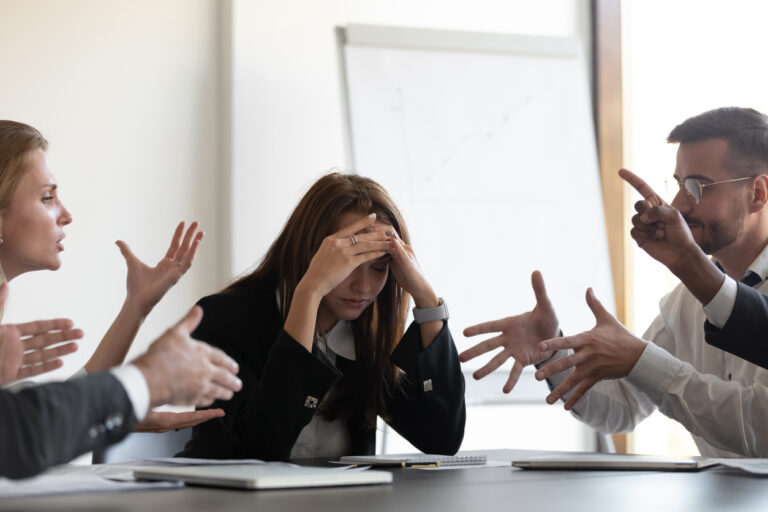 How do I reach people I disagree with?

As a senior vice president, I used to sit around the table at corporate boardrooms and listen to varying opinions about the business.  Some I agreed with – others I did not.  When I experienced disagreement rising, I could feel my energy building towards argument and a need to somehow convince the other person about why I was right; the other wrong.

Such feelings are common.  It happens to each of us at various times in our professional and personal experience.  In coaching, we invite our clients to work towards “reaching others where they are,” which provides a means to bridge those gaps between humans.

Our journey bridging those gaps begins with the understanding of a concept called “Resistance.”  Resistance is really a basic form of energy.  It is effectively used by each of us to protect us from the unknown, which can include anything from fearing a roller coaster as a youngster to hearing a new idea in the corporate board room and quickly concluding that it might hinder our own efforts or even harm the company.

When we encounter an idea that is new to us, or that runs counter to what we “always” have done, we feel a resistance inside us.  As a coach I invite clients to “lean into” that resistance with curiosity and appreciative inquiry, helping them build awareness about the issue or idea before moving to action.

Rick Maurer who authored “Beyond the Wall of Resistance,” cogently explains resistance. Under ordinary conditions, it is experienced in three ways:

In coaching, we work with clients to open themselves up to possibilities when dealing with others and to be willing to let curiosity be their mantra and appreciative inquiry and active listening their guide.  When we meet others as people and learn their viewpoints, the goal is not to win them over.  It is to overcome our own resistance, lean into theirs with curiosity, and then join with them and to learn about their ideas.  We can, by intention, choose to not move towards convincing the other person about anything else except our good will and openness to hearing them out.  Only when we have established a connection with another can we invite the other to hear our thoughts.

Marilee Adams describes two approaches – you can be a “judger” or you can be a “learner.”  The first leads us to draw conclusions about others nearly instantaneously.  We look at their looks, their actions, their mannerisms, their tone – and sometimes even their words – and then draw conclusions about them.  It is a fool’s errand to do so.  The latter approach – that of being a learner, allows us to understand someone else’s journey and approach in life.  It even invites us to learn more about their heart.

Similarly, we can do that by gauging the capabilities of others and never assuming their intentions.

I have worked with many clients who begin the coaching engagement by relating someone who works with them who “just doesn’t get it.”  I explore this viewpoint with them by asking questions like, “Please tell me what that person does get,” and then follow it up in-depth with questions about just how much they know about the other individual, including the challenges and the “backpack” she or he is carrying.  It’s always illuminating for someone to set as a goal learning about the “other,” rather than judging them and hiding behind Maurer’s third wall.

A quote from a professional hostage negotiator might seem like a strange place to conclude this Blog.  Christopher Voss, in a Wall Street Journal interview, speaks articulately about the neuroscience involved in just listening and then summarizing what another person says.  He relates:

“You want the other person to get a hit of oxytocin. You’re going to get that by getting them to say: “That’s right.” You do this by listening and then really summarizing their perspective for them. You especially want to focus on articulating any negative thoughts they have. Don’t dispute or deny them. When the word “but” comes out of your mouth you are denying and it is time to shut up.

Once you’ve articulated their perspective for them, they feel understood. And a person who feels understood is getting a feel-good wave of chemicals in their brain. The one you are really going for is oxytocin, the bonding chemical. Once they get a hit of oxytocin, everything is going to change. They’ll feel bonded to you. And if they feel bonded, whether it’s a little or a lot, that’s to your advantage.”

In these stressful times, each of us feels resistance about so much – if we set our goal at reaching others, rather than winning, that might just be the best way to start.

Dave Bushy of Boston Executive Coaches is a former senior airline executive who works with leaders throughout American industry. This article originally appeared on bostonexecutivecoaches.com.

PrevPrevious ArticleWhy Can’t People Just Stop and Listen? “The Power in Pause”
Next ArticleHow Do I Meet My Goals? Hitting a Moving TargetNext